To celebrate our 10th Anniversary this month, Surrey Muse Arts Society (SMAS) is introducing five art and literature awards in the areas of poetry, fiction, nonfiction, music, and visual arts. Beginning November 2022, these country-wide annual Awards will be open to Canadian citizens, landed immigrants, permanent residents, refugees, and international students. Submissions will begin in June 2022 with a $10 Anniversary-Special entry fee. Prize Money will be $1,000 each. Winners will be selected by independent judges. Submission Guidelines and other details will be made available in the Spring of 2022.

In naming these awards, we pay tribute to Vera Manuel, Joy Kogawa, Susan Crean, Faith Nolan and Norval Morrisseau for their talents, skills, understandings, and struggles. Each one, through their art, has pointed to historic injustices and inequalities in our society, and in that, they are miracle makers creating art, at once, of resistance and healing. As well, for us, naming Surrey Muse Awards in honour of such unique artists brings forth the diversity and scope of Canadian art and literature- giving us a wonderful opportunity to fulfill our mandate of nurturing art and literature by encouraging an inclusive, fair, and equal cultural environment. 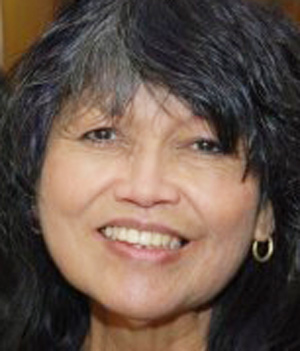 Vera Manuel (1948 – 2010), Butterfly Woman (Kulilu Paⱡki), a poet, playwright, and drama therapist in British Columbia, worked through the inter-generational trauma of Residential Schools and its impact on individuals and communities using her poetry, drama, stage craft, spoken word, and storytelling. ‘For years’, Vera said, ‘I used my poetry as a tool to help people to heal and never thought to publish it or to use it for any other purpose.’ Her play ‘The Strength of Indian Women’ was published in ‘Two Plays about Indian Residential Schools’ (1998/2018). Her writings were anthologized and published in magazines, however, most of her work was published posthumously in ‘Honouring the Strength of Indian Women: Plays, Stories, Poetry – Vera Manuel’ (University of Manitoba Press, 2019). We dedicate the Poetry Award to Vera Manuel to express our gratitude for her undying, healing, and passionate poetic voice.
abcbookworld.com/writer/manuel-vera 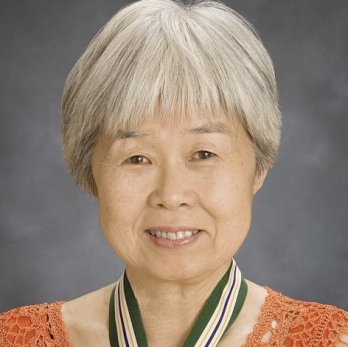 Joy Kogawa is a novelist, YA writer and poet born in 1935 to Japanese Canadian parents in Vancouver. During WWII, in 1942, young Joy and her family were evicted from their home and forced to move to an internment camp, an aggression suffered at the time by some 22,000 Japanese Canadians. Years later, Joy challenged this historic injustice in a profound and masterful exposition: her 1981 novel, Obasan. Her art compelled a public recognition of this issue highlighting the power of written word. Later, her ancestral home was developed as a writers residence titled the Historic Joy Kogawa House. Joy was made a Member of the Order of Canada in 1986, a Member of the Order of British Columbia in 2006, and in 2010, she received the Order of the Rising Sun from Japan. We dedicate the Fiction Award to Joy Kogawa to express our awe for her disarmingly simple yet utterly profound art of storytelling.
joykogawa.ca 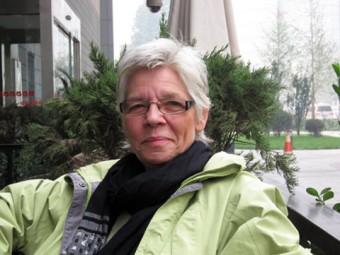 Susan Crean is a cultural critic, author, and activist working in British Columbia and Ontario for over 30 years. A pioneer of creative non-fiction in Canada, Susan’s expertise in Canadian history, art, and culture is evident in her essays, biographies, and memoir. She is the author of seven books, the first, Who’s Afraid of Canadian Culture, appeared in 1976 while her next major work, The Laughing One – A Journey to Emily Carr, was nominated for a Governor General’s award and won a BC Book Prize in 2001. Susan published her memoir, Finding Mr. Wong, in 2018, a work that recreates the life of her family’s cook, Wong Dong Wong. It reached the top 10 list of Best Canadian History books by Canada`s History magazine. We dedicate the Nonfiction Award to Susan Crean for her artistic expression that gives a warm and passionate voice to her factual narrative.
susancrean.ca 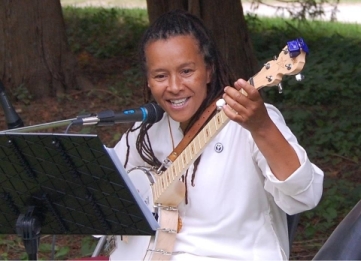 Faith Nolan is a singer/songwriter, filmmaker and an arts activist of Black Mi’kmaq Irish heritage who was born in Africville, Nova Scotia, settling in Toronto, Ontario. A self-taught musician, she has recorded 16 CDs exploring themes of human rights and social change. Her music has been described as a mix of blues, folk and jazz, with a taste of funk and reggae. To Faith, her music is her political work, and her politics is firmly rooted in her perspectives as a coal miner’s daughter, working-class, mixed-race Queer. Faith has founded various choirs, music groups and organizations in Ontario including CUPE Freedom Singers, Voices of Freedom Vanier Women Prisoner Singers, and, the Singing Elementary Teachers of Toronto to create music for children from various cultures. We dedicate the Music Award to Faith Nolan for her compelling musicality that holds the rhythms and lyrics of her revolutionary songs.
faithnolan.org

Norval Morrisseau (1932 – 2007), Copper Thunderbird, who founded the Woodland School of Art, is also called the grandfather of contemporary Indigenous art in Canada. In the 1960s, Morrisseau shattered societal, sexual, and commonly held stereotypes and prejudices, and in the face of intense discrimination, he created a style that was all his own, an artistic vocabulary that inspired a new art movement. A prominent member of the Indian Group of Seven, in 1978, he was made a Member of the Order of Canada. He was a member of the Royal Canadian Academy of Arts where he was given a posthumous Lifetime Achievement Award in 2008. He is the only Indigenous artist to have had a solo exhibition at the National Gallery of Canada. We dedicate the Visual Arts Award to Norval Morrisseau to express our gratitude for the color, the shapes, and the tremendous depth he gave to Canadian visual art.
officialmorrisseau.com

Surrey Muse is an interdisciplinary art and literature presentation group that was founded by four artists of Color in Surrey in November 2011. Mandated to inclusivity and equality, it held 3-hour salon-style monthly gatherings featuring authors, poets and artist/performers, with discussions and open mic sessions. In 2016, for its fifth anniversary, two additional programs were introduced: Surrey Muse At Large and Surrey Muse Writers. The group registered itself as Surrey Muse Arts Society (SMAS) in 2019.

‘This is great news. I love that the awards program supports the interdisciplinary spirit and legacy of Surrey Muse. Congratulations on launching these awards.’
Jordan Strom, Curator of Exhibitions & Collections, Surrey Art Gallery

‘Surrey Muse has done an amazing job over the past 10 years. It has built a community where none existed before. Its success is evident both in the fact that it has been taking place month to month for the past 10 years with a positive response from and participation by its community. Its community has continued to grow which only speaks to its importance.’
Randeep, Co-Founder & Secretary/Treasurer, Surrey Muse Arts Society

Morgan (ze/zim) is a Jewish non-binary writer, photographer and filmmaker born and raised on unceded mi’kmaq territory in Halifax NS. Ze started making films in high school, zirs first screening was at VIEWfinders International Festival for youth. Morgan went on to participate in Atlantic Filmmakers Cooperative’s one minute film program, shooting and cutting on 16mm, and in 2012 became the OUTeast film festival’s Artists In Residence while working on a documentary about Halifax’s drag families. After earning a BA Honours in Anthropology and Gender Studies with a minor in Film from Dalhousie University ze moved to the Coast Salish territories (Vancouver) to pursue filmmaking. Morgan’s latest film ‘Enby’ has screened at Vancouver Queer Film Festival (VQFF), InsideOut Toronto, and it will make its international premiere at the Harvey Milk Festival. Morgan’s work explores intersecting identities through uncertainty, grief and dark humour. Ze is currently writing for PedalStreet and developing zir next project Inch by inch.

At the September 24, 2021 gathering of Surrey Muse, Morgan will be the Featured Performer. More about the event is here: friday-sept-24

Carla Stein is a poet and painter who has released two poetry chapbooks titled ‘Sideways Glances of an Everyday Sailor’ and ‘Shrieking from the Shore’. She is the current artistic director of Wordstorm Society of the Arts, and a co-founder of 15 Minutes of Infamy, a wordcraft performance venue based in Nanaimo, Canada. Her images and poetry have been published in anthologies and literary magazines including ‘Sustenance’, ‘Lemonspouting’, ‘Pocket Lint’, ‘Stonecoast Review’, ‘Please Hear What I’m Not Saying’, ‘Sad Girl Review’, ‘Ascent Aspirations’, ‘Friday’s Poems’, ‘Island Arts Magazine’, ‘Polar Starlight’, ‘An Anthology of Nanaimo Poetry’ and others.

At the July 23, 2021 gathering of Surrey Muse, Carla Stein will begin the Open Mic session. More about the event is here: friday-july-23

Chad Norman is a poet whose poems have appeared for nearly 40 years in literary publications across Canada and in a number of other countries around the world. His most recent books are ‘Simona: A Celebration Of The S.P.C.A.’ (Cyberwit Net Press, India 2021), and ‘Squall: Poems In The Voice of Mary Shelley’ (Guernica Editions, Toronto 2020). His poetry has been translated into Albanian, Spanish, Polish, Chinese, Turkish, and Italian. Chad hosts and organizes RiverWords: Poetry & Music Festival each year in Truro, Nova Scotia. Following a tour of Nordic countries in 2016, he began to write a travelogue titled ‘Counting Coins In Denmark And Sweden’. Chad is a member of The League Of Canadian Poets.

At the July 23, 2021 gathering of Surrey Muse, Chad Norman will be the Featured Poet. More about the event is here: friday-july-23

Cristy Watson is a poet, and an award-winning author of eight novels for middle grade and young adult readers. Her titles include ‘On Cue’ (2016), ‘Benched’ (2011), and ‘Living Rough’ (2011). As a poet, she received an editor’s choice award in CV2’s 2-Day Poem contest in 2013. Cristy also participates in the Poetry Marathon in June, preferring the half-marathon where she writes twelve poems to twelve prompts in twelve hours. She volunteers at the Surrey International Writer’s Conference. At this time, Cristy is the Committee Chair for Wise Words and she is looking forward to engaging senior writers in a meaningful dialogue through this new project by the Federation of BC Writers (FBCW).

At the July 23, 2021 gathering of Surrey Muse, Cristy Watson will be the Featured Author. More about the event is here: friday-july-23