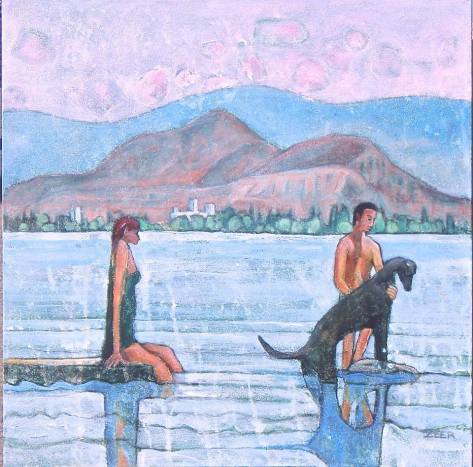 ‘This 1×1 metre ‘Bathers and Dog’ was painted on the shoreline of Lake Okanagan in 2010.

‘I set up my easel on the shore of the lake, with background of an extinct volcano, the Selkirk Mountains behind but needed some ‘foreground material’. At that moment a young guy with his huge black dog and pretty girlfriend happened to be walking by and I instantly though perfect! They were thankfully very obliging to pose for some pictures taken with my IPad.

‘This painting is still in my domain to purchase, in case anyone is interested.’

‘Bathers and Dog’ is featured on the October 2017 poster of Surrey Muse. 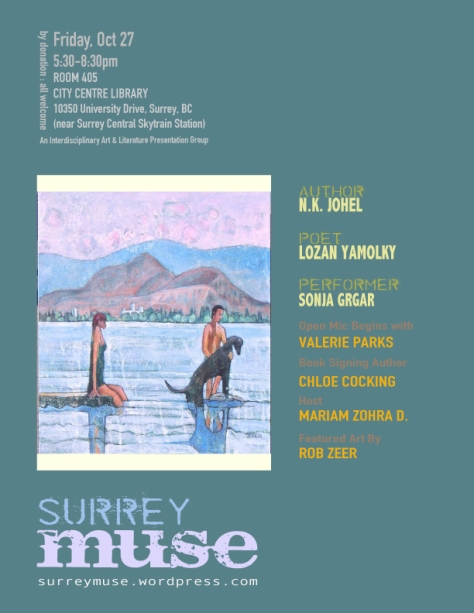 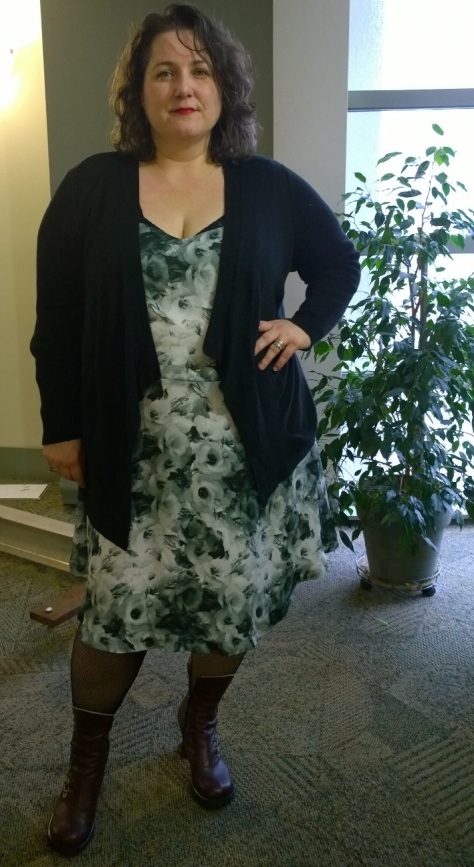 Chloe Cocking is a fiction writer, poet and playwright who has just launched her first novel ‘Blood Rain‘. She is the author of a one-woman play ‘The Blanket on Freud’s Couch‘, and her micro-fiction, articles and poems have appeared in various literary publications, zines and anthologies including ‘Saving Seeds‘ (New West Writers, 2014). She has served as a member of the editorial collective of A Room of One’s Own. She is a member of critique group New West Writers. Chloe professes to be a ‘writer of dark urban fantasy’, and she runs a blog and a newsletter on her craft and different aspects of her life as a writer.

At the October 27 gathering of Surrey Muse, Chloe will be the BookSigning Author. More information about the event is here:
october-27-gathering 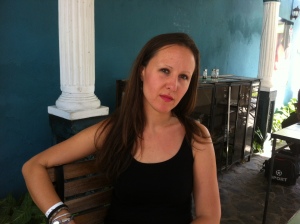 Sonja Grgar is a freelance journalist and creative writer with a passion for complexity. She has been featured in a number of poetry and prose anthologies including Family Ties Anthology (Hidden Brook Press 2014). Sonja is the recipient of the 2014 Writers International Network Canada Literary Ambassador Award. Her writings have appeared in the Globe and Mail, and were broadcast on CFRC 101.9 FM Radio (Kingston, ON) and on Vancouver’s Co-Op radio. She has created several magazine style television stories and documentaries for Shaw TV, and has served as a co-host for several of the station’s programs. Her mini documentary on the first Vancouver Cuban Music Festival was aired on Shaw TV. Sonja has been a featured reader and performer at a number of local groups including Poetic Justice and Surrey Muse, and she was ‘proud to serve on the latter’s organizing collective as a Media Coordinator‘. Sonja also co-facilitated Surrey Muse Writers, a drop-in critique group. When she is not writing, Sonja can be found salsa dancing or waxing poetic about Cuba.

At the October 26 gathering of Surrey Muse, Sonja will be the Host. More on the event is here:
october-26-gathering 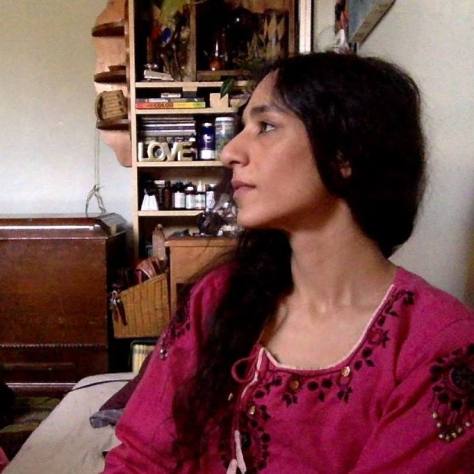 Mariam is a poet, vocalist, and a multi-disciplinary artist combining music, video, drama, painting and poetry. She has published albums including ‘So Divine’ with musician Lend Me Your Underbelly from Netherland. Her first album, a collaboration with USA-based musician Unearth Noise, Dreamspeak’, was launched by Amsterdam’s Lullabies for Insomniacs in 2018. Mariam shares her songs via Soundcloud and Bandcamp. A collection of her poems, lyrics and drawings is published in These Tales Are True (Purple Poppy Press 2016). Her poems also appeared in the anthology Saving Seeds (Ed. Valerie B.-Taylor, NWW 2014). Her first collection of poems Not to Understand (Diva Publications, Toronto 1990) was published when she was 14. Later, some of her poems appeared in Toronto’s Feminist Quarterly Fireweed, and in Transitions a textbook anthology produced for Grade 10 students by Peel Board of Education, and she also worked with Theatre In The Rough, a youth drama collective. Mariam studied Philosophy and Creative Writing at Douglas College. She is a founding Member of Surrey Muse where she works as Art Director, Media Producer and Graphic Designer. View the event posters created by her at surreymuse.wordpress.com/posters.

At the September 25 gathering of Surrey Muse, Mariam will be the Host. More on the event is here: september-25-2020 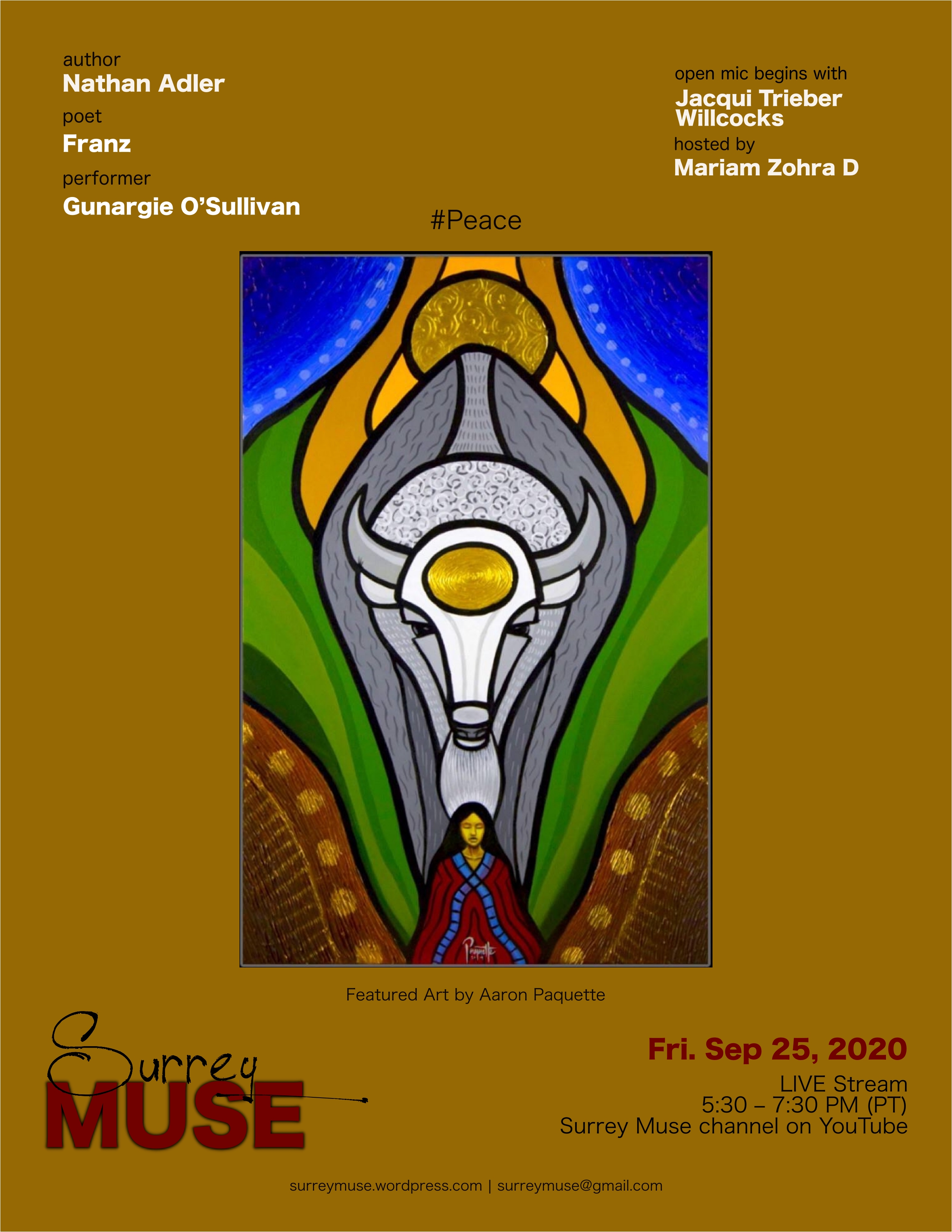